20 months ago we were blessed with the arrival our little girl. It was stunning and beautifully fulfilling all at the same time. It was also the last time that Ky and I have spent a night alone. We’ve gone to dinner, movies and have had our (small) share of date nights but until now we (read: ME) hadn’t felt comfortable leaving M for the entire night. It was time. So, in celebration of Ky’s big 3-0, we scheduled a mountain getaway and left M for a play-dough playing, banana bread eating good time at her grandparents. Turns out, it’s shockingly quiet and relaxing without a toddler to play with all evening. We went to the spa, ate dinner out and drank wine like we owned the place. We also talked about M all night and made a few phone calls to tell her we missed her. It was hard and it was fun and it was fantastic all balled up into one tiny trip.

Side note to this; Isn’t it so wonderful to have a spouse? It’s like you gain a birthday. ‘Oh, you want to dinner for your birthday? Darn, I guess I’ll come too’ ‘Wait, you want a massage? Sign me up as well’ I’m such a good wife. 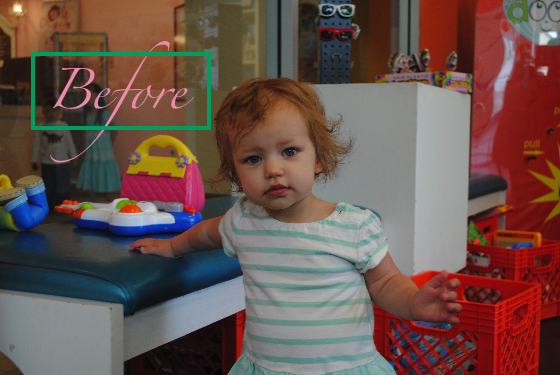 Lately, people see pictures of M and giggle at her ‘bed head.’ She’s not always just waking up folks. Been up for hours in fact. Her ‘bed head’ is just all the time head. I swear I brush her hair but it’s just fuzzy and uneven and cute as heck but slightly crazy {as is her personality so maybe it just suits her}.

So, I took her for a little trim a few days ago. She squirmed and moved around and the people at Dooz just went with the flow. They had all the tricks down;  a drawer of toys, funny faces in the mirror and just patiently waiting for a magical moment when she wasn’t checking out everything around her to snip. 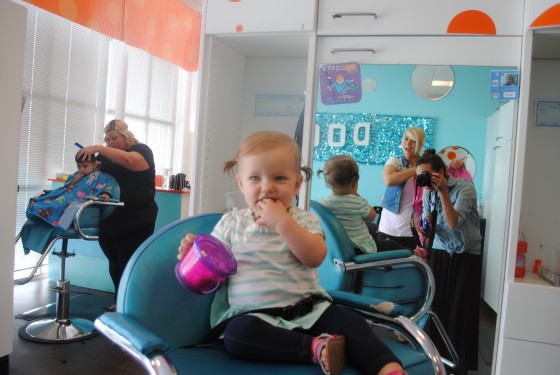 And then the greatest thing happened…they gave her pigtails! People, I must be such a sap. I almost cried from the cuteness. Then, I immediately felt so sad that Ky was out of town, had no cell service and wouldn’t be able to see this for a few days. So, I did what any good parent would do. I sat her up in the play area of the mall and took about a million pictures of her while all the big kids ran around her at full speed.

Don’t worry about her though, she walked straight into a three year old, the girl fell over and just looked at her in shock that this had just happened. Obviously she wasn’t hurt so I just helped her up and apologized but she just kept staring at M like, ‘really, tiny pigtail girl just knocked me over.’ Maybe the pigtails are a good disguise for her. She’ll look all sweet and gentle but inside she’ll still be the fireball that she is. Yup’, we’re wearing pigtails more!